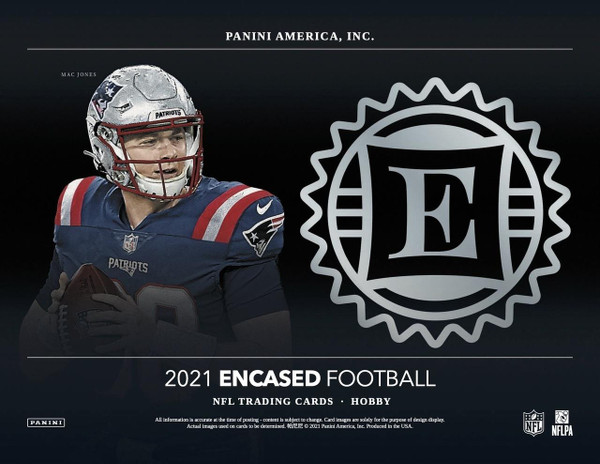 - Encased football is loaded with autographs and memorabilia from all of the best rookies and legends that the NFL has to offer! Find two autographs, one of which will be graded by Beckett Grading Services and two memorabilia cards per box on average!

- Hunt for on-card autographs from the top rookies of the loaded 2021 NFL Draft Class!

Look for a 100-card base set that includes all of the biggest names that the NFL has to offer and be on the lookout for short-print parallels and rare base autographs!

Be on the look out for on-card autographs in Rookie Endorsements from all of the best young talent that the loaded 2021 NFL Draft Class has to offer!

Look for Superscribe Signatures, which feature on-card signatures from some of the biggest veteran names in the NFL today!

Another on-card rookie signatures to hunt, look for Rookie Notable Signatures that will feature autographs from the likes of Trevor Lawrence, Ja’Marr Chase, Justin Fields and many, many more!

Hunt for quad patch memorabilia cards from some of the biggest names in this year’s stellar freshman class!

Always a fan favorite, look for Gamers Jumbo Jerseys, which feature oversized, game-used swatches from some of the biggest names from the NFL’s past and present!